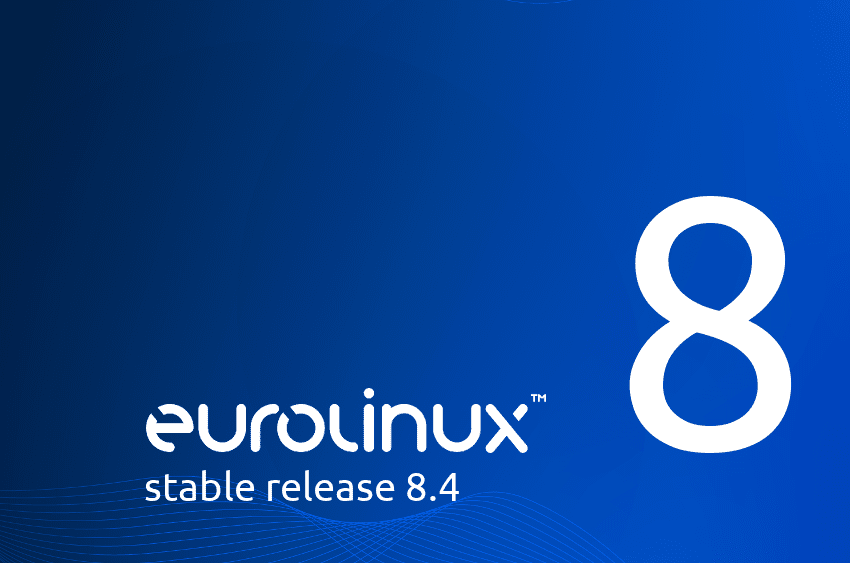 On August 16, 2021 we released version 8.4 of the EuroLinux operating system. It adds a few important technology highlights. The new release is compatible with the latest version of RHEL. As we already indicated, EuroLinux 8 is a distribution based directly on the Red Hat® Enterprise Linux® system source code.

The 8.4 release focuses on two goals that were key for us:

In this press release note, we describe the technological advantages and capabilities of the EuroLinux ecosystem. We also provide a roadmap and links to technical release notes along with jump start documentation. All new features in this release are marked as (New) in the header.

Advantages and technological differentiators of EuroLinux

To date, none of the distributions derived from Red Hat® Enterprise Linux® sources (both RHEL itself and those that try to call themselves community-developed systems) have made their buildroot open. This means that those not in the project cannot fully enjoy the privilege of building their own software on a given system. All of these systems provide repositories devoid of many packages. In particular the development packages, which contain (among other things) the headers necessary to develop your own software for Enterprise Linux platforms. EuroLinux is the only one Enterprise operating system vendor that has decided to make full build trees available to the community. These contain all packages produced from source packages contained in the repositories.

NOTE: Packages and repositories that give access to full build trees are not officially supported. For example in the case of perl packages, they are broken by design because it is impossible to simultaneously make all build artifacts available and support 100% modularity.

Below is a sample .repo file, that contains addresses to certify-BaseOS-all, certify-AppStream-all i ceritfy-PowerTools-all for x86_64 architecture. These repositories should be used for building packages – do not use them as your main system repositories.

The appropriate configurations for the mock package builder have been suggested in a pull-request on GitHub.

Although the 32-bit architecture is slowly becoming obsolete, a huge part of software still requires a runtime stack for 32-bit applications. What's more, due to the growing popularity of Linux it's actually impossible to fully abandon it, because of support for full version of Wine and computer games. This was painfully discovered by the Canonical team, which in Ubuntu 19.10 tried to abandon support for 32-bit libraries – and consequently also support for platforms such as GOG or Steam. The dissatisfaction of the community and the outflow of users was so great that it was decided to bring back 32-bit libraries.

NOTE: As with the x86_64 version, packages and repositories that give access to full builds are not officially supported. In the case of perl packages, they are broken by design because it is impossible to simultaneously make all build artifacts available and support 100% modularity.

Below is a sample .repo file, that contains addresses to certify-BaseOS-all, certify-AppStream-all i ceritfy-PowerTools-all for i686 architecture. These repositories should be used for building packages – do not use them as your main system repositories.

The appropriate configurations for the mock package builder have been suggested in a pull-request on GitHub.

We recently created open documentation for EuroLinux. We wanted as much transparency as possible and the possibility to involve the community, which results in:

By using a global CDN provider, packet transfer speeds have increased significantly. This is especially noticeable when dealing with heavy loads and massive downloads. In the future, we will look to expand our systems to include the ability to use community mirrors.

The EuroLinux build system has been enhanced with the ability to template configuration files. Now instead of 4 different files (for x86_64, i686, aarch 64 (ARM 64) and ppc64le architectures) everything is configured at the level of a single file. Customers developing their own Linux based on EuroLinux sources already have access to the latest version of the build system.

Additional improvements have been made to the build stack. We've added the Vardøger project (written in ASCII characters as vardoger) – which improves package comparison capabilities relative to the upstream solution.

In addition to increasing the capabilities of the build system, we made marketing changes. According to suggestions we decided to change the name of this project, because the word beast has both positive and negative connotations. During the vote the name was chosen from Greek mythology "Gaia'' that is Mother Earth.

We have modernized our software sharing model. From version 8.3, EuroLinux is available both as a paid subscription and for free in the Open Core model. The advantage of such a solution is to deliver as much value as possible to users and communities. It is a modern, transparent and responsible business model.

From version 8.3, every user of EuroLinux and EuroLinux containers receives a full system with updates released at the same time for both, paid and free users.

The paid version of the system additionally provides:

EuroLinux is available and supported in versions 8.x, 7.x and 6.x. As a result, it can be used as the only system in an organisation's ecosystem.

The latest supported versions of EuroLinux are:

A complete stack is more than just an operating system

In addition to the operating system, we offer a number of other universal products. All of them are based on open source solutions and together form a useful technological stack. The following are available today:

The software, like any tool, is of little use without people who know how to use it properly. That is why we also offer authorized training in the administration of Enterprise Linux systems at various levels of advancement:

In 2021 we plan to provide two more training courses:

The first one focuses on configuring multiple system services. After its completion, the participants will be able to find themselves in a modern environment, where many services, often closed in microservices or containers, must cooperate seamlessly together. The issues of troubleshooting and debugging, valuable from the point of view of expert knowledge, will also be discussed. This is an updated version of the Enterprise Linux 7 training. The other training is devoted to automation in Linux using Ansible technology. It is recommended, among others, for EuroTower or Ansible Tower users.

In addition to delivering our own products, we also provide professional technical support. Its distinguishing feature is the simplified procedure in the first line support, allowing for quick contact with specialists (engineers and architects) of the second and third line support. In addition, we offer dedicated professional services for the client, services in the field of capacity planning, audit services, migration assistance, tuning database systems, system architect support, as well as proactive continuous care.

We provide our clients with repositories containing, in addition to packages, information about errata, i.e. about: security patches, increasing the capabilities of a given software package or fixing errors. These files are important when using EuroLinux in environments where software updates are mainly enforced by security patches.

The EuroLinux project has been fully communicating its plans and their timeframe since the initial release of version 8.3. Unlike many young organizations and their branches that have emerged recently, we are not dependent on external sponsors. This allows us to be autonomous and persistent in pursuing the goal that is our company’s guiding motto: True Product - Real Support - Fair Price.

EuroLinux is a complete solution with standard modules that are available in other distributions for an additional fee. They extend the functionality of the system and increase its technical value. Among them are: Load Balancing, High Availability and Resilient Storage.

EuroLinux is the only modular distribution on the market whose RPM packages are 1 to 1 compatible with RHEL® releases. This required the development and implementation of a build system that allows for local and repetitive compilation of packages.

Below is an example summary for the modular nginx package:

The topic of building modular packages, creating a build system from scratch, and a software supply-chain attack resistant operating system will be covered in detail in the near future.

We support customers who decide to purchase subscriptions for a large number of machines. Therefore, the unit price not only decreases with the quantity, but also from a certain level we offer a Golden Key subscription. It allows an organisation to use the software without quantitative limits.

EuroLinux Gaia – build your own Linux

The proprietary EuroLinux Gaia tool introduces a new ground-breaking functionality for organisations. It is the ability to independently build (compile) the operating system from source files in the customer's own infrastructure. This is the highest possible level of system delivery and support. It guarantees the maximum level of security (trust) and allows customisation of the product. It also allows creation of your own dedicated distribution (fork).

As part of the solution, the customer receives:

Updates for CentOS after 2021

EuroLinux is also a recommended alternative to CentOS, which will cease to receive stable updates at the end of 2021 and will become an experimental distribution. As CentOS is part of the Enterprise Linux family, it can use stable updates from EuroLinux. This process is completely safe, reversible and does not require reinstallation of the system. This makes it possible to extend the CentOS life cycle until 06/30/2029. Therefore, companies are increasingly choosing EuroLinux support, especially for environments with large numbers of systems. We have prepared a special support offer for such organisations.

The EuroLinux development map in graphical form is as follows: 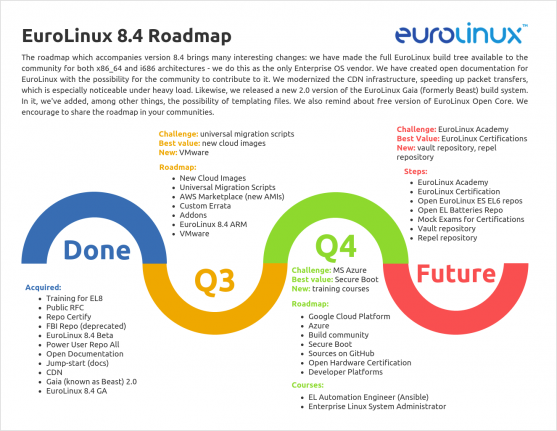 An installation of the system, along with information on where to download the installation media, is described in the open documentation: EuroLinux 8 Jump Start.

Reporting comments, bugs, and ideas is described in the documentation.