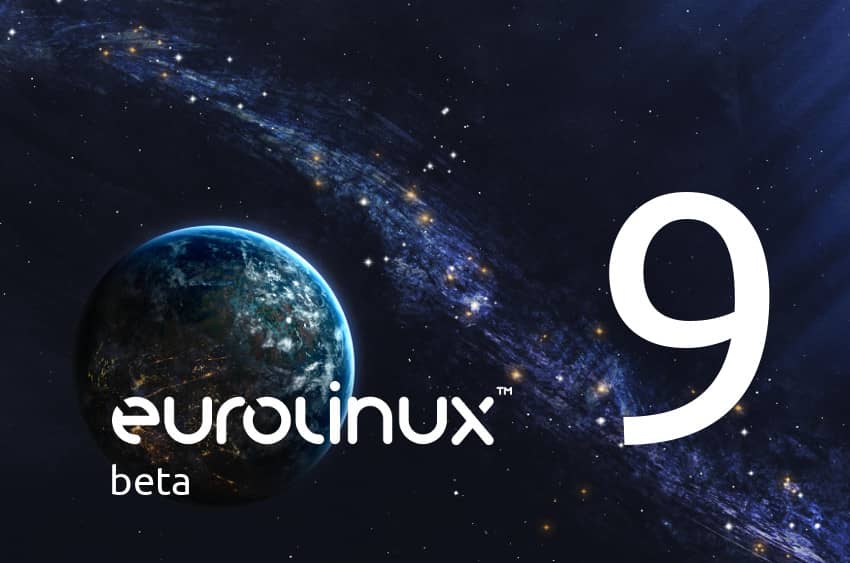 On March 1, 2022, we released version 9.0 Beta of the EuroLinux operating system. It is compatible with the latest upstream release. With this release we focused on delivering the most developer-friendly platform across the entire family of systems built upon the source code of Red Hat® Enterprise Linux®. A lot of heart and passion has been put into building this version to be released as soon as upstream does.

At the beginning we will describe the technical advantages and new capabilities of the EuroLinux ecosystem. Then we will present links to the release notes documents along with the jumpstart documentation. For the purpose of this article, we will be referring to the aforementioned family of systems built upon the source code of Red Hat® Enterprise Linux® as the Enterprise Linux family.

Advantages and technological differentiators of EuroLinux

The fastest release of RHEL® clone

EuroLinux is the first freely distributed and publicly available clone of RHEL® 9 beta. It will allow us to create and maintain the EuroLinux 9.0 general availability version faster with extended QA processes and mature rebuild processes.

We have released universal migration scripts. They are available at https://github.com/EuroLinux/eurolinux-migration-scripts. What’s important is that these scripts update all packages of the distribution you are migrating from. No packages from the previous vendor remain after migration. This is the implementation of one of the popular requests made by our customers. In addition, the scripts have options that allow you to customize their operation to individual requirements. The migration process is described here.

Since both EuroLinux 9.0 and Upstream’s release are Beta versions as of today, a lot may change in the meantime before a final release sees the daylight. Because of that, the script does not cover migrating from these Beta versions. Though when implementing additional logic, there may be some conditionals that check for version 9. This is due to the fact that the differences between EuroLinux 9 and 8 will not be as enormous as with 8 and 7.

EuroLinux 9 beta included High Availability and Resilient Storage repositories from the beginning. They significantly increase the system’s capabilities and allow for easier migration, especially from very expensive cluster solutions from other vendors. The same is applicable to EuroLinux 9.0.

In line with our developer-first idea and community-oriented approach, with EuroLinux 9 an open buildroot is published. Thus, EuroLinux will once again be the only Enterprise OS vendor to make full build trees available to the community. These contain all produced packages for the packages contained in the various repositories. In particular, the -devel packages, containing among other things the headers necessary to build your own software for Enterprise Linux platforms.

Below is a sample .repo file which contains addresses to repositories with the aforementioned buildroot for EuroLinux 9 Beta.

Please note: these repositories should be used for building packages - they should not be used as main system repositories.

As professionals, we realize that it is not always possible to migrate from certain legacy software essential for the functioning of an enterprise and requires a runtime stack for 32-bit applications. Moreover, due to the growing popularity of Linux, it is de facto impossible to fully abandon it - if only because of the support for full version of WineHQ and computer games. Furthermore, there may be a need to build applications for the i686 architecture because of compatibility with an enterprise’s existing work environment. Also in this area EuroLinux 9 is taking care of providing its build roots for the architecture mentioned. EuroLinux is the only Enterprise Linux that provides buildroot for i686 architecture.

Below is an analogous to the previously mentioned sample .repo file, which contains addresses to repositories with the mentioned buildroot for the i686 architecture.

Please note: these repositories should be used for building packages - they should not be used as main system repositories.

We recently created open documentation for EuroLinux. We wanted as much transparency as possible and the possibility to involve the community, which results in:

EuroLinux x86_64 was built with Gaia 2.0 stack. We are currently building EuroLinux 9 beta for ARM64 (aarch64) with an updated rebuild stack. It's an ideal opportunity to deliver a next gen stable and well-tried build stack that allows to create custom distributions and forks. This version includes better support for modules autorebuild, new tools for errata management, new commands and new QA tools in stack.

In addition to increasing the capabilities of the build system, we made marketing changes - starting with Gaia 2.0. According to suggestions we decided to change the name of this project, because the word beast has both positive and negative connotations. During the vote the name was chosen from Greek mythology “Gaia’’ that is Mother Earth.

We have modernized our software sharing model. From version 8.3, EuroLinux is available both as a paid subscription and for free in the Open Core model. The advantage of such a solution is to deliver as much value as possible to users and communities. It is a modern, transparent and responsible business model.

From version 8.3, every user of EuroLinux and EuroLinux containers receives a full system with updates released at the same time for both, paid and free users.

The paid version of the system additionally provides:

EuroLinux is available and supported in versions 9, 8.x, 7.x and 6.x. As a result, it can be used as the only system in an organization’s ecosystem.

The latest supported versions of EuroLinux are:

EuroLinux 9.0 will be fully supported as well once a production-ready version is released.

A complete stack is more than just an operating system

In addition to the operating system, we offer a number of other universal products. All of them are based on open source solutions and together form a useful technological stack. The following are available today:

The software, like any tool, is of little use without people who know how to use it properly. That is why we also offer authorized training in the administration of Enterprise Linux systems at various levels of advancement:

In Q2 of the 2022 we plan to provide two more training courses:

The first one focuses on configuring multiple system services. After its completion, the participants will be able to find themselves in a modern environment, where many services, often closed in microservices or containers, must cooperate seamlessly together. The issues of troubleshooting and debugging, valuable from the point of view of expert knowledge, will also be discussed. This is an updated version of the Enterprise Linux 7 training. The other training is devoted to automation in Linux using Ansible technology. It is recommended, among others, for EuroTower or Ansible Tower users.

In addition to delivering our own products, we also provide professional technical support. Its distinguishing feature is the simplified procedure in the first line support, allowing for quick contact with specialists (engineers and architects) of the second and third line support. In addition, we offer dedicated professional services for the client, services in the field of capacity planning, audit services, migration assistance, tuning database systems, system architect support, as well as proactive continuous care.

We provide our clients with repositories containing, in addition to packages, information about errata, i.e. about: security patches, increasing the capabilities of a given software package or fixing errors. These files are important when using EuroLinux in environments where software updates are mainly enforced by security patches.

The EuroLinux project has been fully communicating its plans and their time frame since the initial release of version 8.3. Unlike many young organizations and their branches that have emerged recently, we are not dependent on external sponsors. This allows us to be autonomous and persistent in pursuing the goal that is our company’s guiding motto: True Product – Real Support – Fair Price.

EuroLinux is a complete solution with standard modules that are available in other distributions for an additional fee. They extend the functionality of the system and increase its technical value. Among them are: High Availability and Resilient Storage. In the short future we will release NFV and RT repositories as well.

EuroLinux is the only modular distribution on the market whose RPM packages are 1 to 1 compatible with RHEL® releases. This required the development and implementation of a build system that allows for local and repetitive compilation of packages. Because EuroLinux 9 is the first to release version 9 beta, we decided to present it on the version 8.

Below is an example summary for the modular nginx package:

For customers who expect technical support we offer the purchase of subscriptions. The unit price of the service not only decreases with the number of machines, but additionally from a certain level we offer Golden Key subscriptions. It enables the organization to use the software without any quantity limits.

EuroLinux Gaia – build your own Linux

The proprietary EuroLinux Gaia tool introduces a new ground-breaking functionality for organizations. It is the ability to independently build (compile) the operating system from source files in the customer’s own infrastructure. This is the highest possible level of system delivery and support. It guarantees the maximum level of security (trust) and allows customization of the product. It also allows creation of your own dedicated distribution (fork).

As part of the solution, the customer receives:

EuroLinux 8 is also a recommended alternative to CentOS 8, which ended its life in its stable form at the end of 2021 and became an experimental distribution. As CentOS is part of the Enterprise Linux family, it can use stable updates from EuroLinux. This process is completely safe, reversible and does not require reinstallation of the system. This makes it possible to extend the CentOS 8 life cycle until 06/30/2029. Therefore, companies are increasingly choosing EuroLinux support, especially for environments with large numbers of systems. We have prepared a special support offer for such organizations.

An installation of the system, along with information on where to download the installation media, is described in the open documentation – EuroLinux 9.0 Beta Jump Start.

Reporting comments, bugs, and ideas is described in the documentation.