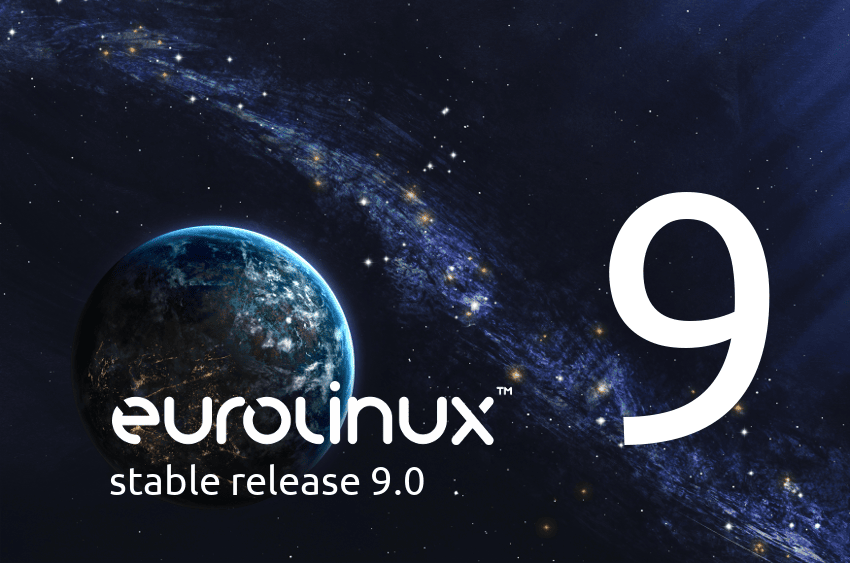 On June 13, 2022, we released version 9.0 of the EuroLinux operating system. It is compatible with the latest upstream release. This release focuses on providing improved default cryptographic policies, a 5.14 kernel, a graphical management interface via a web panel, and improvements related to cloud, virtualization and containerization. "Nine" also introduces a major update in the form of the GNOME 40 desktop environment (with modern GTK 4). An important change for those who want to use EuroLinux on x86_64 architecture, is the need to have a processor supporting x86_64-v2 microarchitecture (also on virtual machines)

Since version 8.3, the EuroLinux operating system is offered in an Open Core model - both as a paid subscription and free of charge. Customers and the community get access to the software at the same time, in the same version and in the same repositories.

We provide all the officially supported versions of the Enterprise Linux family of systems:

EuroLinux version 9 and 8 is the only system to officially provide entire build trees and so-called buildroots. This streamlines software development for developers and advanced users.

Example dnf/yum configuration for use in building packages:

EuroLinux 9 and 8 also provide packages in the i686 architecture for building 32-bit applications. These allow you to create environments that require 32-bit libraries to ensure backward compatibility. An example of a yum.conf configuration used in a tool such as mock:

As an organization we have been supporting various systems from the Enterprise Linux family since the very beginning. Since version 8 we have gained new abilities - in addition to the basic system we have the ease of building and maintaining dedicated systems that are forks of EuroLinux and special purpose Linux distributions (including custom built systems). With each release EuroLinux is tested many times. We check subsystems and build artifacts, that is, components of the system. All this is done so that creating a fork as well as a dedicated distribution is as easy as possible and gives the expected, reproducible results.

One of the important elements of our offer are universal migration scripts. Currently they support migration to EuroLinux from Enterprise systems in the following versions:

When stable versions of Oracle Linux 9 and Rocky Linux 9 are released - the migration support will also be applicable to these systems.

The migration scripts along with a description of the migration process can be found in the Migration Scripts GitHub repository. The latest versions of the scripts include enhancements to preserve packages from other distributions (however, this may imply the use of third-party software). We have described the migration process here. There is also a video tutorial there.

EuroLinux is part of the ELevate Project. The project is currently enabling the transition from CentOS 7 to EuroLinux 8 and is under constant development. Instructions for using the tool will appear soon on our website.

Additional modules (Add-On) in each system

EuroLinux is a complete solution, including as a standard the modules that are available at additional cost in other distributions. They extend the functionality of the system and increase its technical value. Among them one can distinguish: High Availability and Resilient Storage. In the near future we will also make the NFV and RT repositories available.

We are also preparing training on Enterprise Linux 9 based on EuroLinux 9. Already in Q3 of this year, together with partners, we will conduct trainings on "nine" at the following levels:

In the long run, the training that will also be adapted to the ninth edition will be the following:

Updated training syllabuses will be on our website soon.

We also plan to provide a page to verify certificates by name and certificate number.

Open documentation is available for EuroLinux. We wanted to be as transparent as possible and to be able to involve the community, which makes the following possible:

All the available versions can be found here (Docker) and here (Quay).

Vagrant boxes for VirtualBox, libvirt and VMware Workstation are available at the following address:

All the available versions can be found here.

The complete stack – more than a system

In addition to the operating system, we offer a number of other products. What is important, they can run on any system from the Enterprise Linux family and selected SUSE systems. All of them are based on Open Source projects and together form a useful technology stack. These are:

EuroLinux Gaia is a proprietary tool that allows you to build (compile) an operating system yourself from source files in your own customer infrastructure. EuroLinux 9 x86_64 was built using the Gaia 3.0 stack, and we are currently building EuroLinux 9 ARM64 (aarch64) with an updated rebuild stack. Improvements to EuroLinux Gaia 3.0 include.:

With the EuroLinux Gaia solution the customer receives:

An installation of the system, along with information on where to download the installation media, is described in the open documentation - EuroLinux 9 Jump Start

The installation images are available at: https://fbi.cdn.euro-linux.com/isos/

Plans for the future

Stay tuned to our blog in the near future for additional enhancements and releases:

Upcoming a unique product on the market – EuroLinux Desktop

We will soon inform you in more detail about a surprise - a new distribution based on a stable core, which is undoubtedly EuroLinux. EL Desktop, as it is referred to, is a Linux offering for Microsoft Windows users. It provides improvements (including support for many higher versions of the Linux kernel), extensive multimedia support, office suites and a new friendly look. The official name is still under discussion, but the project is tentatively called EL Desktop.