EuroLinux 9 has been with us for quite a while now. Today we will take a closer look at the important changes it brings with regard to the previous release.

EuroLinux 9 is designed to meet the needs of a hybrid cloud environment. Therefore, it can run code efficiently, whether it is deployed on physical infrastructure, in a virtual machine or in containers.

It's also worth mentioning that based on EuroLinux 9 is EuroLinux Desktop, a user-friendly and easy-to-use system for people who use Windows® or macOS® on a daily basis.

EuroLinux 9 is built on top of the latest runtimes and compilers, including GCC 11.2.1 and updated versions: LLVM 13.0.1, Rust 1.58 and Go 1.17, allowing developers to modernize their applications.

The system includes updated versions of core developer tools such as GCC 11.2.1, glibc 2.34 and binutils 2.35. The new GCC compiler functionalities help users better track code flow, improve debugging options and write optimized code for efficient use of hardware. The new GCC compiler includes modifications for compiling C and C++ code, along with new debugging messages for logs. Programmers therefore have better insight into how their code is performing.

With next-generation Application Streams (AppStreams), developers have a wider choice of versions of popular programming languages and tools. They can also choose from multiple versions of user space components as application streams, which are easy to update. This provides greater flexibility in customizing EuroLinux to fit their own work environment. The contents of application streams also include tools and programs that are rapidly released and frequently updated. These application streams, called rolling streams, are fully supported throughout the whole life of EuroLinux 9.

EuroLinux 9 extends the modularity functionality from EuroLinux 8. In the new version of the system, all packaging methods such as Software Collections, Flatpaks and traditional RPMs have been incorporated into application streams, making it easier for developers to use their preferred packages.

OpenSSL 3.0 adds a provider concept, a new versioning scheme and improved HTTPS. Providers are collections of algorithm implementations. Developers can programmatically invoke any provider based on application requirements. EuroLinux's built-in tools have been recompiled to take advantage of OpenSSL 3.0, allowing users to take advantage of new encryption and information protection mechanisms.

eBPF enabled only for privileged users

Extended Berkeley Packet Filter (eBPF) is a complex technology that allows users to execute custom code inside the Linux kernel. Due to its nature, eBPF code must pass through a verifier and other security mechanisms. There have been cases of Common Vulnerabilities and Exposures (CVEs), where bugs in this code could be exploited for unauthorized operations. To reduce this risk, eBPF was enabled in EuroLinux for privileged users only. It is possible to enable eBPF for unprivileged users by using the kernel command line parameter unprivileged_bpf_disabled=0. It is recommended to treat processes with the CAP_BPF capability as if this capability was equal to CAP_SYS_ADMIN.

cgroup-v2 enabled by default in EuroLinux 9

Control groups version 2 (cgroup-v2) implements a single hierarchy model that simplifies the management of control groups. In addition, this version ensures that a process can only be a member of one control group at a time. Deep integration with systemd improves the end-user experience when configuring resource controls in EuroLinux 9.

To use cgroup-v1, add the following parameters to the kernel command line:

Linux distributions with kernel versions earlier than 5.9 supported exporting GPL functions as unlicensed functions. As a result, users were able to combine proprietary functions with GPL kernel functions through the shim mechanism. In this release, the EuroLinux kernel includes changes that enhance the system's ability to enforce the GPL by rejecting shim.

It has been decided to set a page size of 4 KB of physical memory for the 64-bit ARM architecture in EuroLinux 9. This size fits well with the workloads and amount of memory present in most ARM-based systems. To make effective use of large page sizes, use the huge pages option to address more memory or workloads with large data sets.

perf-top can sort by a specific column

With this update to the perf-top system profiling tool, samples can be sorted by any column of events. Previously, events were sorted by the first column when multiple events in a group were sampled. To sort samples, use the --group-sort-idx command line option and press the number key to sort the table by the matching data column. It's worth noting that the column numbering starts at 0.

Checkpoint/Restore In Userspace (CRIU) is a Linux utility that enables checkpointing and restoration of processes. The jigawatts package includes a Java library designed to enhance the usability of CRIU mechanisms from within Java applications.

Note that a good compression ratio also depends on how the system is used and what type of data is stored in RAM.

makedumpfile includes improved options to get an estimate of vmcore size

With this implementation, the makedumpfile tool now includes the following options to help print an estimated dump size for the currently running kernel:

It's vital that one note the size of the dump file may vary depending on the state of the system at the time of failure, and the estimate given by the options may differ from the actual state.

numatop is a tool that tracks and analyzes the behavior of processes and threads running on NUMA systems. It displays metrics that can identify NUMA-related performance bottlenecks.

kexec_file_load has been added as the default option for EuroLinux 9

EuroLinux 9.0 adds the kexec_file_load system call for the 64-bit ARM architecture. It provides kexec file loading in the kernel for kdump. Previously, the kernel prevented unsigned kernel images from loading when Secure Boot was enabled. The kdump mechanism first tried to detect whether Secure Boot was enabled, and then selected the boot interface to run. As a result, the unsigned kernel could not be loaded with Secure Boot enabled and the kexec_file_load() function specified.

This update fixes the problem and the unsigned kernel works correctly in the described scenario.

Note that the crashkernel=auto option on the boot command line is no longer supported in EuroLinux 9 and later releases.

Thanks to the core scheduling functionality, users can prevent tasks that should not trust each other from sharing the same CPU core. Similarly, users can define groups of tasks that can share a CPU core.

With this update, the 64-bit ARM architecture defaults to using lazy direct memory access (DMA) domain for the system memory management unit (SMMU). While this brings significant performance gains, it can introduce a window between address unmapping and Translation Lookaside Buffer (TLB) overflow in the SMMU. In previous versions, the 64-bit ARM architecture configured strict DMA domains by default, resulting in performance degradation due to the 4KB page size.

With this update, PMU counters respond correctly to CPU hot-plugging. As a result, if the hv_gpci event counter runs on a CPU that is shut down, the counts redirect to another CPU.

IRDMA driver has been implemented in EuroLinux 9

EuroLinux 9 introduces the lacp_active parameter for the bonding module in the kernel. This parameter determines whether to send Link Aggregation Control Protocol Data Unit (LACPDU) frames at specified intervals.

Note that LACPDU status frames are still sent during port initialization or unbinding.

The GNOME desktop environment has been upgraded from GNOME 3.28 to GNOME 40 and includes many new features.

It provides a new and improved look for the Activities viewer. It gives a more consistent look and provides a better experience when navigating the system and launching programs. Workspaces are now arranged horizontally, and the window overview and program grid are available vertically. 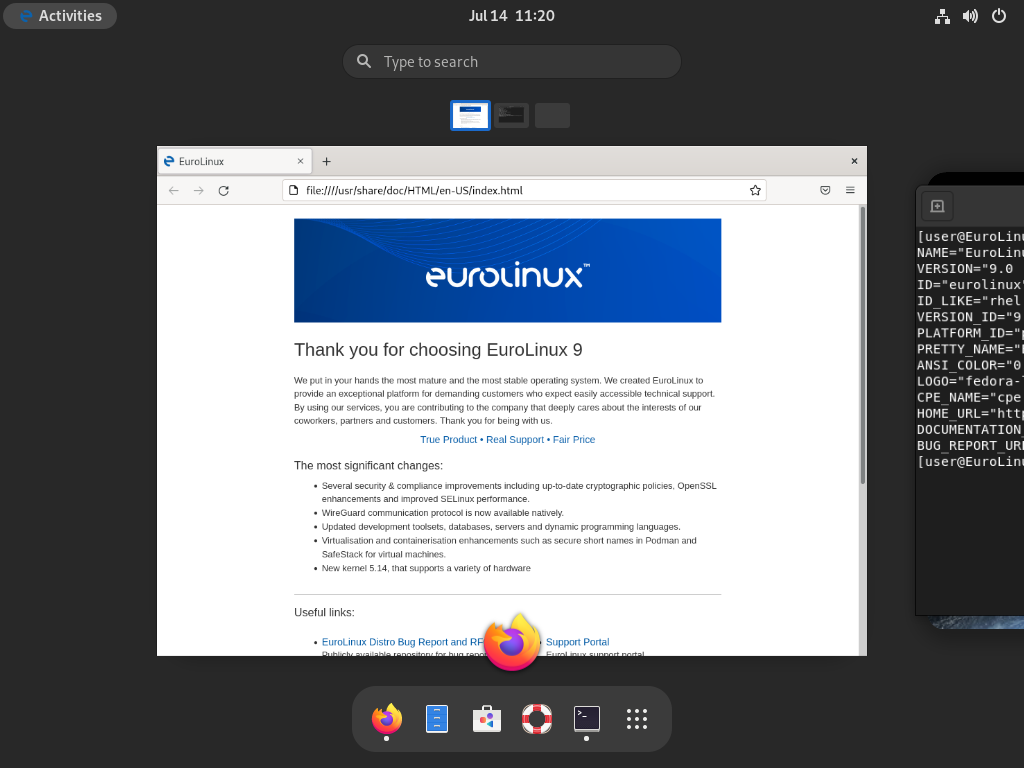 In the Power panel of GNOME Settings, you can now switch between several power profiles. Power profiles optimize different system settings for the selected purpose.

The following power profiles are available:

Performance – optimizes for high system performance and reduced battery life. This profile is only available on certain selected system configurations.

Balanced – provides standard system performance and power consumption. This is the default profile.

Power profiles functionality is available from the power-profiles-daemon package, which is installed by default.

Lightweight environment for a standalone application

A lightweight user interface is now available for graphical applications where only a single application is used.

Users can run GNOME in a single-application session, also known as kiosk mode. In this session, GNOME displays only the full-screen window of the configured application.

Security classification banners at login and in desktop session

Classification banners can be displayed in the following contexts, depending on the configuration:

Classification banners can be in the form of a notification that can be dismissed or a permanent banner.

EuroLinux 9 introduces groundbreaking changes from Release 8. In this article, we have described the most important noticeable technical, visual and environment delivery differences for developers.

EuroLinux 9, of course, contains many more changes. We encourage you to learn about them as you use the system. Link to download the ISO image: https://fbi.cdn.euro-linux.com/isos/EL-9.0-x86_64-20220613-appstream.iso.