We are publishing the current roadmap for the EuroLinux operating system, our development plans for the current quarter and related activities. According to our strategy of transparency, we inform in advance about upcoming work.

Our roadmaps are created according to the following template:

The current roadmap is the result of a pilot project, where we decided to collect and incorporate feedback from some of our partners. In the future, we will expand this circle, including members of the EuroLinux community. 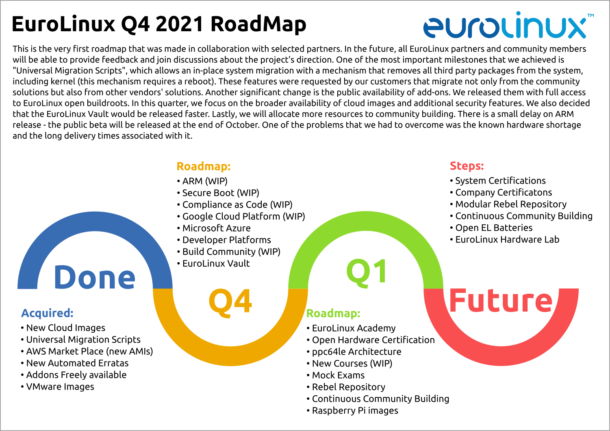 Explanation of the roadmap points

Some of the points on our roadmap are marked as (WIP – Work in Progress). This means that when publishing the roadmap, these points are already being implemented by the development team.

Below we present more detailed information about the plans included in the map.

Most people may rightly associate the term ARM architecture (mainly developed by the company of the same name) with phones. ARM processors have many advantages over processors based on x86_64 architecture such as energy efficiency. As such, they are slowly making their way into cloud computing, home solutions such as NAS and hobbyist solutions such as microcomputers which include the popular Raspberry Pi. Our goal is to release a full release of EuroLinux on this architecture this quarter with all the technological advantages developed by our organization so far. This means among other things free usage with no limits and access to open source buildroots.

The Secure Boot mechanism allows running the bootloader and then the kernel of the system with checking if they are cryptographically signed. This quarter we plan to release a full version of EuroLinux that supports this mechanism.

In this quarter we will also focus on improving the support for Compliance as Code mechanisms. This mechanism allows us to introduce and manage security policies in an automated and repeatable way.

We are working on preparing images (v. 7.x and 8.x) for Google Cloud Platform, which you will be able to download, with instructions, from our cloud image repositories.

We are preparing for you an official image for the Microsoft Azure cloud platform. You will be able to download it, along with instructions for uploading and running it, from our cloud image repositories.

An important step in our strategy to widely adopt EuroLinux is to make it available on developer platforms and smaller cloud providers. Currently, the list of platforms we are on or plan to be on in the near future is over 15. In Q4, in addition to new images for popular development platforms and smaller clouds, we will also make a generic image available with instructions on how to use it on each platform.

The idea of a vault as a place to store sources is well known in the software world. The most colorful example is the arctic vault where some repositories from GitHub are stored. In our case, in addition to the system sources, we plan to put older versions of EuroLinux together with our open buildroots.

Future and publication of the following roadmap

The next roadmap will be published at the end of December, so we will create a survey where you can express your needs and suggestions in early December.