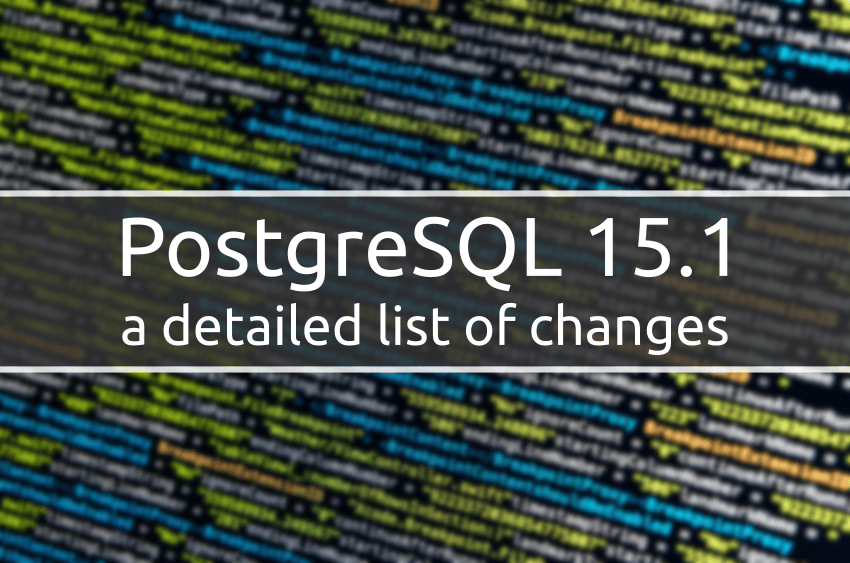 At the end of 2022, we received a series of new updates from the Postgres team that improve the quality and security of our databases. Today we will take a closer look at the latest PostgreSQL patches, list the versions that received patches, for which this is the last official patch. We invite you to read on.

The PostgreSQL engineering team continues to positively surprise with the speed of releasing fixes and patches for their product. After the release of the highly anticipated Postgres version 15 and its warm reception by users, the developers did not rest on their laurels. Just less than a month later, on November 10, 2022, we received a significant patch of fixes for various versions of the Postgres database system. The support of the PostgreSQL development team covers only the most recent versions of the database, hence the patches are available for the following versions: 15.1, 14.6, 13.9, 12.13, 11.18, i 10.23.

The best time for change

It should be emphasized that the support for Postgres version 10 has reached its end. As the developers themselves emphasize: "PostgreSQL 10 will no longer receive bug fixes and security patches." Postgres 10.23 is therefore the final form of the version 10 product and it is recommended to upgrade to higher versions. To learn more about upgrading to a newer version of PostgreSQL, we recommend taking a look at the built-in pg_upgrade tool. The documentation is available here.

A detailed description of the fixes

Here is a list and description of the fixes that have been prepared for version 15.1. However, some of them are also provided for previous versions of PostgreSQL, including the 10.23 release.

In addition to the above table of improvements with their detailed description, the naming of time zones has been corrected in accordance with tzdata of 2022. The Europe/Kiev zone has also been renamed to Europe/Kyiv. In addition, the following zones have been merged with nearby larger zones that have the same time since 1970. These are:

It should be noted that all currently used time zone names will be available as an alias to the newly assigned ones.

Having been watching the engineering team of The PostgreSQL Global Development Group for some time now, we can rest assured about the future of Postgres. With the development of new versions of the database system, we are able to administer the database in a more efficient and increasingly secure way. All those who are not satisfied with the capabilities of "pure" PosgtreSQL, we encourage you to get acquainted with the EuroDB database platform, which significantly extends the capabilities of Postgres and at the same time is fully compatible with it.