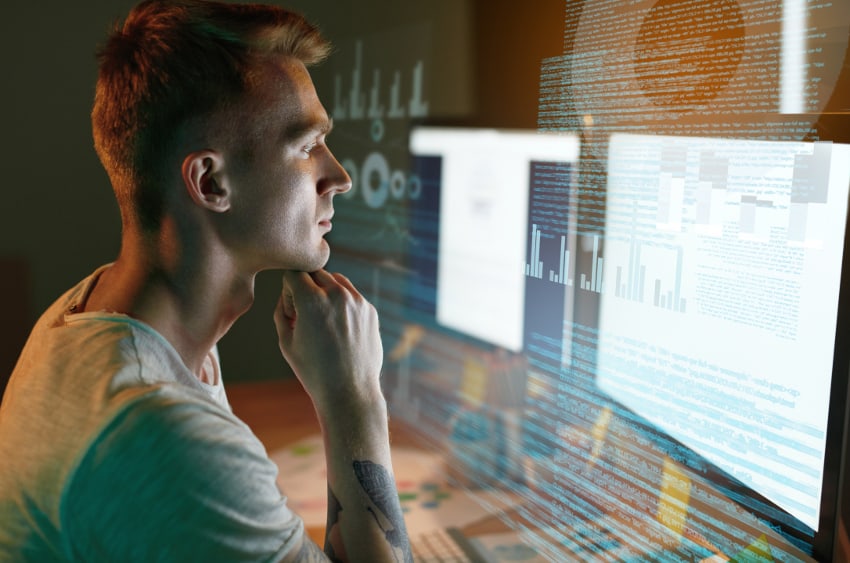 In my professional experience, I quite often have the opportunity to conduct recruitment, a part of which are questions related to Linux family systems. One of the standard questions is about an important, although in fact not saying much, system statistics, which is the average system load (abbreviated to loadavg). Unfortunately, it happens, also in the case of people with really impressive professional experience, that the candidate is not able to correctly describe and interpret the information ensuing from the load average.

So I decided to ask myself what is the reason for this. I checked trusted “sources of truth”, such as search engines (DuckDuckGo and Google) and Wikipedia. The latter, in fact, described the statistics most fully. Unfortunately, there are a lot of simplifications or even errors on the Internet about that subject. There is nothing surprising in this, as the system manuals themselves often do not fully describe what these statistics are.

To discuss the average system load, however, it is necessary to go back and introduce a minimum theory about processes and their states in Linux. I let myself draw from a proven source of knowledge that is the EuroLinux Training Manual for Enterprise Linux Administration at the Basic Level.

Excerpts from the “Enterprise Linux Administration I” training manual

Processes can be in different states. To understand the outputs of commands that describe processes, you must first understand these states. The table below lists the flags to be displayed with process names and an explanation of the state assigned to the given state in the internal kernel structures.

In addition to the flags listed above, we also have a K flag for "killable", which is a D-flagged process that can be killed, and an I flag for "idle". However, processes in this state are rarely seen as they are usually performed by internal kernel processes.

The diagram below shows the different states of processes and the basic interactions between them. 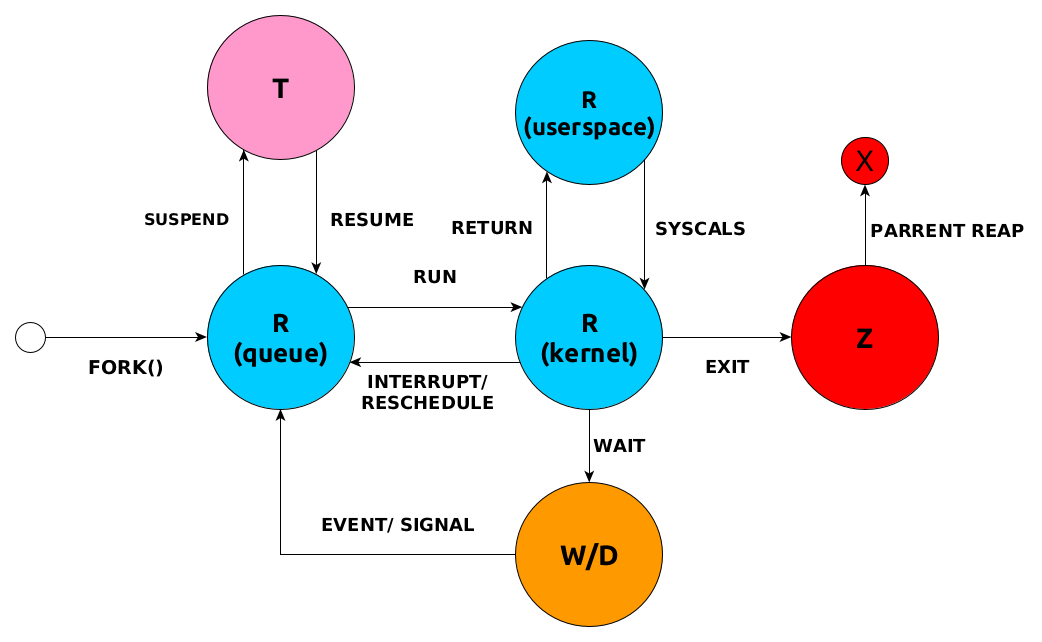 Where are the process states defined?

The Linux process itself and the process states are defined in the kernel source in the source/include/linux/sched.h ("sched" is an abbreviation from “scheduler”). Let me paste the code snippet that defines the states of the process:

The most important process states are those that the kernel allows us to read easily with the const char *get_task_state function, which assigns the state to the char variable contained in the task_state_array.

Already knowing the states of processes at the kernel level (it is worth paying attention to the special selection of their values and the ability to perform bitwise operations on them) we can move on and discuss what loadavg is.

According to the manual man 5 proc loadavg contains statistics that is the average sum of the processes in states R and D. This means that we have here the following processes:

Most studies on the Internet do not recognise the fact that the R state can mean both executing and queuing to be executed. The concept of a state waiting to be run (state R) is also often confused with the concept of a state waiting for I/O (state D). In addition, no attention is payed to the fact that in the case of saturation of RAM and the use of swaps, the processes also fall into state D.

Load average is given for 3 periods:

This allows the administrator to understand the system load trend.

The load average should be considered in the context of the amount of CPUs available, taking into account SMT (Simultaneous MultiThreading) and HT (Hyper-Threading) mechanisms. The easiest way to find the number of available processors (in the sense of a logical processor) is to use the nproc command.

An example of calling an uptime command (returning, among other things, load average) and nproc:

The simplest rule regarding the load average is that it should be smaller than the available compute units. Of course, depending on the actual use of individual resources, the system and its services may not work at all satisfactory. Looking at the above example, for 8 logical processors and loadavg for about 5, the system is not overloaded. However, if the number of processors were less than 5, we would have to deal with a potentially overloaded system.

Under the /proc/loadavg path, the Linux kernel provides a file interface with information about the average system load. It is used by programs such as uptime, w or top.

Sample reading of the file /proc/loadavg

As for the source file that defines this interface, it is linux/fs/proc/loadavg.c. Let me include a code snippet as I find it a very good example of how kernel code can be fascinating:

Here I would like to draw attention to the non-obvious techniques used in such a short piece of code.

To download loadavg we can use the system sysinfo call. It returns a sysinfo structure that looks like this:

If we want to create ourselves a program that reads loadavg without using the file interface (the discussed earlier /proc/loadavg), the above system call is the easiest way to collect information about the state of the system. Example of a simple C report:

and its compilation along with the launch:

This is the most common mistake (resulting from the lack of knowledge about the state of the processes) that I can observe during recruitment interviews. As we have emphasised many times above, load average includes both processes in the state R (running and ready to run) and D (pending). If load average specified only how many processes are running, it would never be greater than the number of compute units in the system. The above response of the candidate quickly leads to contradictions.

This is one of the more difficult questions that are called "follow up questions"(additional questions during the recruitment process, often aimed at checking how thorough is the candidate's knowledge on the subject).

In the man 5 proc manual it says:

It would seem, then, that we are dealing here with an ordinary arithmetic mean. The final answer will be given by Linux sources, which explicitly describe load average as:

Thus, we are dealing with an exponential moving average, in which further attempts have less impact on the result than newer ones.

Myth 2 – high load average is always related to the processor

As previously explained, loadavg counts processes in state R and D in exponential moving average. This means that these processes can:

So we have at least three components that can be overloaded:

There are therefore several possibilities which can occur individually, in pairs, or all at once.

In addition, it may happen that a high loadavg does not mean that the system is overloaded. For example, the processor load at half its capacity + swapping (RAM saturation with the need to dump and load memory pages on/off disk) can result in high loadavg.

The average load is therefore statistics that mainly draws attention to the need for further diagnostic steps to understand the state of the system and its processes.

As a curiosity on the border of computer science and philosophy I would like to quote the comment contained in Linux sources in the linux/sched/loadavg.c file.

The point here is that the Linux kernel can manage the processor in such a way that system interrupts do not occur at fixed intervals (hence the name tickless: tick from ticking, e.g. every 1000 Hz [processor cycles] and less [meaning "without"]), but are set dynamically.

To be honest, when I first saw this comment in my life, I was speechless. After all, we are talking about one of the most important statistics from the point of view of the administrator in the system! Therefore, when considering and reading the source files, I would like to point out that from the point of view of the kernel programmer, the statistics is not at all obvious or "certain" (as far as trust is concerned) for many reasons:

A natural question therefore arises - does load average make sense? Well, one might be tempted to say that if the authors themselves have doubts, maybe not quite. However, even if we see the flaws of the solution at an expert level of knowledge and understanding, but in general it works, it is worth applying Murphy's law here. As I said at the outset, please treat the above statement in terms of loose considerations of a modest author.

The article discusses the states the processes can be in, how the load average looks from the inside (i.e. in Linux kernel sources) and how we, as administrators and programmers, we can get to this value. Finally, we have dealt with common myths about this useful statistics.