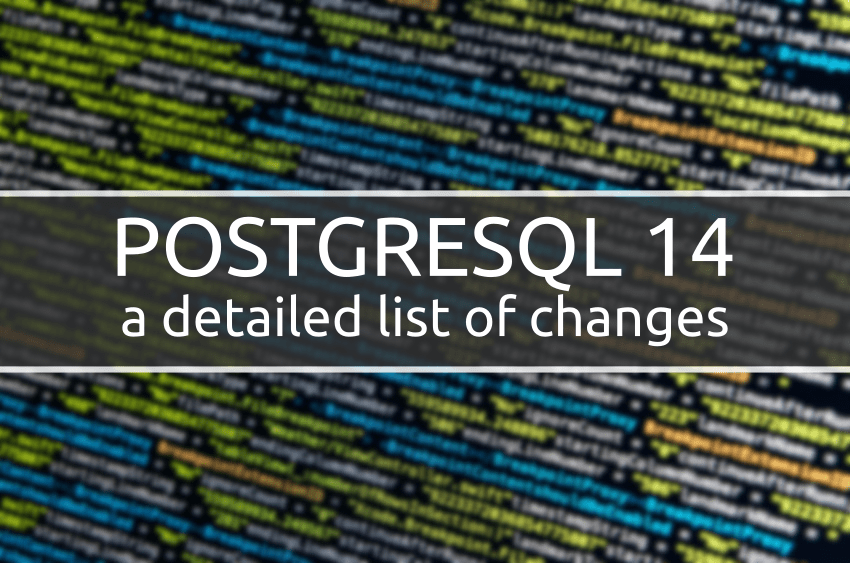 On September 30, 2021 the latest version of PostgreSQL 14 was released! Postgres fans had the opportunity to celebrate the whole week, because 6 days earlier was the first anniversary of version 13. It is therefore a great time to look at the changes that the creators of the top database engine have prepared in the current version. In a word of introduction, let's first explain what Postgres is and what it means in the current market.

PostgreSQL is an object-relational database management system, developed at the University of California at Berkeley Computer Science Department. With over two decades of development behind it, PostgreSQL is now the most advanced open-source database available anywhere.

The POSTGRES project, led by Professor Michael Stonebraker, was sponsored among others by the Defense Advanced Research Projects Agency (DARPA). The implementation of POSTGRES began in 1986 and first demo version was operational in 1987.

In 1994, Andrew Yu and Jolly Chen added an SQL language interpreter to POSTGRES. Under a new name, Postgres95 was released to the web as an open-source descendant of the original POSTGRES Berkeley code. Interestingly Postgres95 code was completely ANSI C, trimmed in size by 25% and ran about 30–50% faster compared to POSTGRES.

By 1996, it became clear that the name "Postgres95" would not stand the test of time. So they chose a new name, PostgreSQL, to reflect the relationship between the original POSTGRES and the more recent versions with SQL capability. Worth noting is that they set the version numbering to start at 6.0, putting the numbers back into the sequence originally begun by the Berkeley POSTGRES project.

Many people continue to refer to PostgreSQL as "Postgres" (now rarely in all capital letters) because of tradition or because it is easier to pronounce. This usage is widely accepted as a nickname or alias.

According to Google Trends, the popularity of PostgreSQL (blue) continues to increase, and its advantage between paid solutions such as Oracle (red) has started to increase dramatically. This happened throughout 2015, when new solutions such as MongoDB (yellow) became more popular. 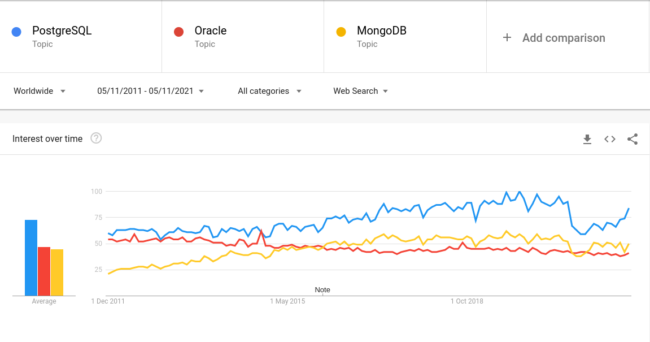 The graph shows interest over time - the peak of popularity of a topic in Google searches was marked as 100. A value of 50 means that the topic was half as popular. 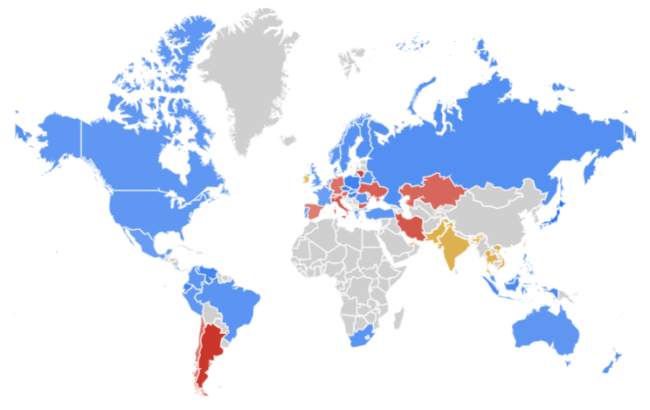 The map shows the popularity of PostgreSQL (blue), Oracle (red), MongoDB (yellow) over the last 10 years. The darker the color, the greater its advantage in a given region. Gray color means no data.

Version 14 of the PostgreSQL relational database was released on September 30, 2021 and has a number of new features compared to its predecessor. The creators of the latest version of Postgres noticeably focused on database performance, a new replication method, or emergency mode for garbage-collector. These are only examples of new features that can be found in the latest version of PostgreSQL 14. A comprehensive list of all changes is available below.

Detailed list of new functionalities and changes in PostgreSQL 14

Vacuum is another name for Garbage-Collector, in other words a tool for collecting and removing unnecessary things (so-called garbage) from the database - e.g. dead tuples.

The above list of new features in PostgreSQL shows constant development and commitment of many communities, whose goal is to create the best, the fastest and always free database engine. We will be happy to follow Postgres development and keep you informed of any news.