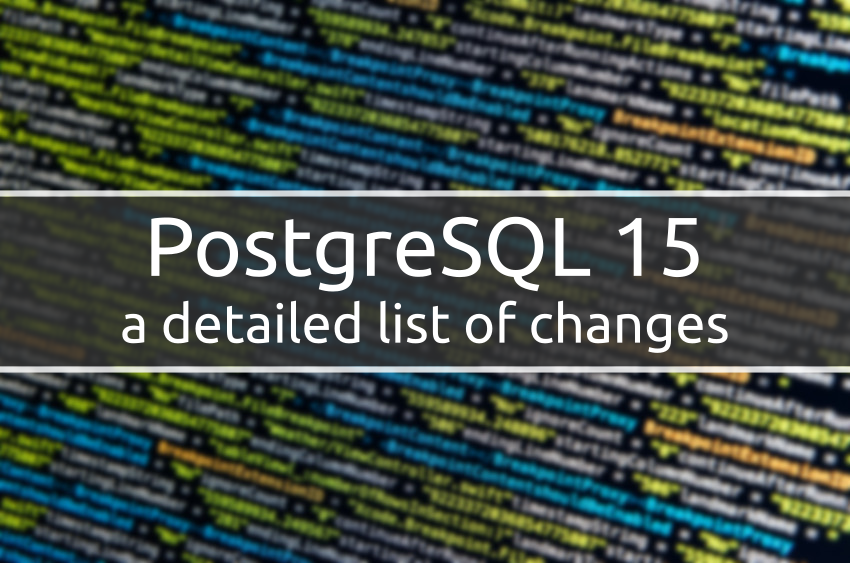 On October 13, 2022, the PostgreSQL Global Development Group team released the latest version of the highly anticipated PostgreSQL 15 database engine, so it's a good opportunity to get a closer look at the freshest product, comparing it to the previous version. As standard, we will also check the current position of PostgreSQL in the market.

PostgreSQL is a system for managing object-relational databases. It allows storing data in the form of a table with multiple relationships and manipulating them simultaneously using SQL. PostgreSQL was developed at the Department of Computer Science at the University of California, Berkeley. With more than two decades of development behind it, it is currently the most advanced open source database. For more information on the history of Postgres, as well as the user dispute between the name PostgreSQL and Postgres, see our article detailing the changes in PostgreSQL 14.

Behind the scenes of Postgres 15

Watching developers struggle with the problems encountered with beta versions on an ongoing basis, one can come to the conclusion that there was a lot of room for improvement in PostgreSQL 15. The latest Postgres actually lived to see as many as 4 beta versions and 2 RCs (Release Candidate). This by no means indicates a lack of competence on the part of the developers; on the contrary, grappling with such a huge project is fraught with the presence of certain challenges, which the developers are constantly solving. At the same time, many users are testing the operation of subsequent versions on their own environment, reporting new, often very intricate bugs. Hence, we offer well-deserved congratulations and wish you a moment of rest.

PostgreSQL's position in the market

Google Trends service will once again serve us to verify the popularity of PostgreSQL (in blue) against its rivals. On the chart you can see the beginning of the global pandemic at the end of 2020. This is the period when search results dropped dramatically, only to skyrocket again in January 2022. This could have been due to the emergence of many companies selling their products online. Rival database Oracle (in red) did not have such a process, perhaps because only very large corporations that can afford to overpay are reaching for it. MongoDB (yellow), as a free alternative to Postgres, has also received some small boost in interest. 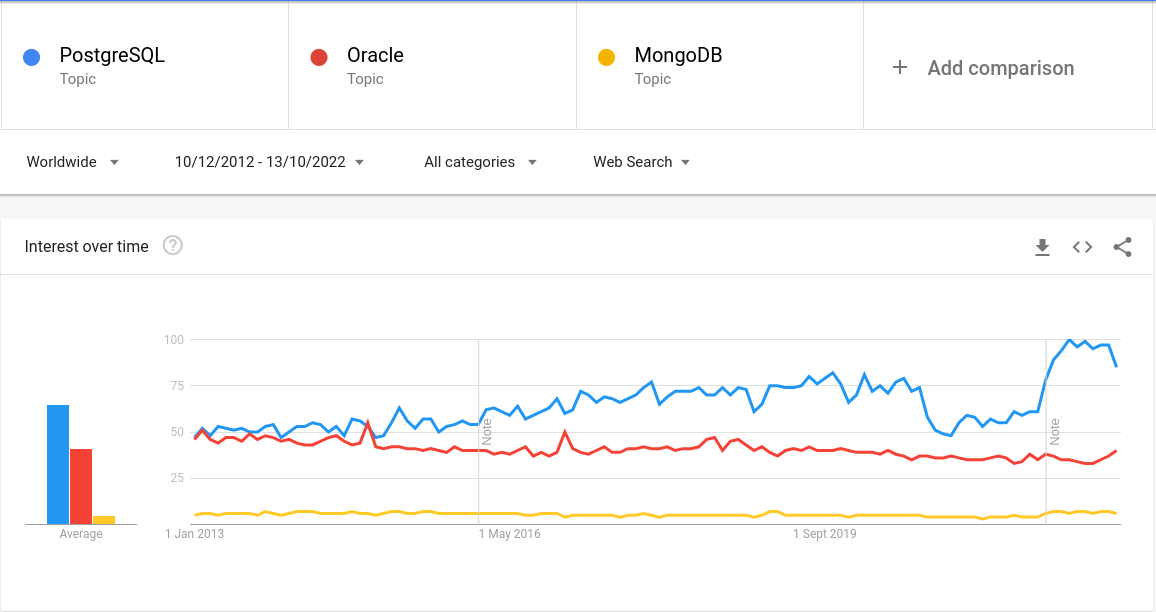 The graph shows interest in specific solutions over time. The peak of popularity of a phrase in Google searches was marked as a value of 100. A value of 50 means that the phrase was twice less popular. 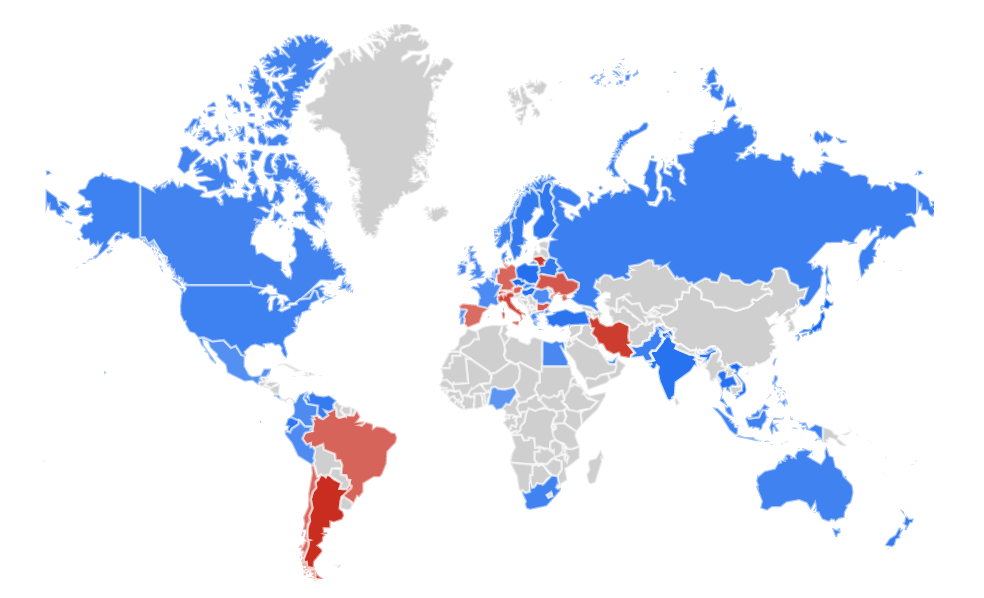 The map illustrates the popularity of PostgreSQL (blue), Oracle DB (red), MongoDB (yellow) over the last 10 years. The darker the color, the greater the advantage in a given region. The gray color indicates a lack of data.

The latest release of PostgreSQL has set a high priority on performance improvements. In-memory and on-disk sorting algorithms have been upgraded, making test results show performance gains of 25% to as much as 400% depending on the data types being sorted. The performance improvements in the latest version of PostgreSQL 15 don't stop there, and also include archiving features, as well as backups. The latest PostgreSQL also features greater flexibility in managing logical replication. Row filtering, column listing or features that simplify conflict management are just a few of the many useful features that PostgreSQL 15 offers.

A significant difference from the previous version can also be seen in the new log format. These can now be processed in structured logging systems. The configuration of Postgres itself has also been improved. As of this version, administrators have the ability to give users permission to change configuration parameters at the server level. In addition, users can now query configuration information using the `\config` command from the psql command-line tool.

Other noteworthy new features include changes in the way statistics are collected, the ability to set the collate ICU as the default, the addition of the pg_walinspect extension, a change in the permission policy for the public (default) schema, as well as the removal of the backup disable mode and the dropping of support for Python 2 from PL/Python.

The aforementioned information are only the changes that are noticeable at first glance. To find out what else to expect from the latest release of the best open source database, we invite you to read the detailed list of changes, available below.

Summary and a word about the creators

Often when we look at a product, we don't see the people behind it. We don't see those who put their hearts and took the time to create it. So it is a good experience for our imagination to occasionally look at a product from a different angle. We will try to put a picture of the Postgres developers in a few words. PostgreSQL Global Development Group is a private non-profit company that has been known in the market for 26 years. Invariably, it has been actively involved in improving the quality of the PostgreSQL database system for more than 15 years. It currently has 71 professionals, or at least that number appears on its official LinkedIn profile. The company notes that its main office is located in the United States - but does not specify where specifically. Interestingly, when asked, Google Maps points to Canada. But maybe in reality PostgreSQL Global Development Group does not have an office and everyone works from anywhere in the world? One thing we are sure of - it doesn't matter where they do their work - they do it brilliantly, and each new version becomes the working standard for millions of developers.