EuroModeler is a market-leading computer aided software engineering (CASE) tool. It allows to design databases using Entity-Relationship modelling with ability to automatically generate SQL code for PostgreSQL engine, which is the heart of the EuroDB database platform.

Graphical database modelling using Entity Relationship diagrams allows for efficient creation of abstractions needed in the application design phase. This allows to resolve potential issues when breaking changes do not incur high costs. However, EuroModeler with its powerful features can prove to be a valuable tool throughout the entire application lifecycle – from the design to the maintenance. 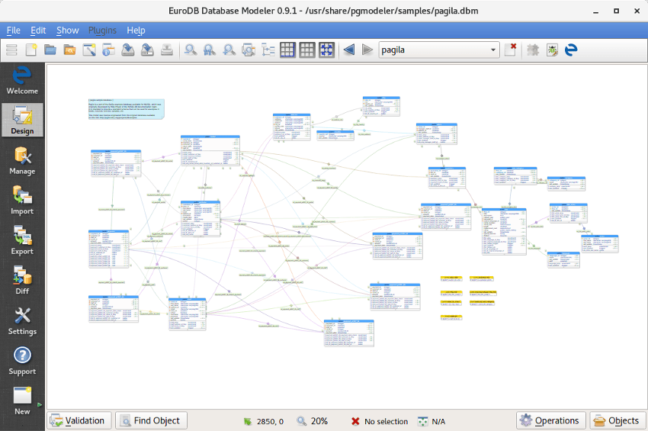 The main function of EuroModeler is to create graphical diagrams of relations between database objects. You can define a vast array of PostgreSQL embedded objects – such as tables, columns, sequences, views, types – in an intuitive way without the need to write SQL code. The modelling process is supported by built-in tools that allow, among others, to:

The file format used by EuroModeler is XML-based, which enables to export created projects to other tools used during the software development process.

EuroModeler is also well suited for introducing incremental changes that are consistent with agile software development methodologies. All thanks to the tool allowing for generation of scripts compensating for differences between the state of the database and the model – so called "diff".

Another advantage of EuroModeler is a set of built-in tools for database management. The convenient interface includes such tools as:

In combination with other tools of the EuroDB database platform, such as a statistics or log analyzer, DBA can quickly correct problems, for instance missing indexes.

EuroModeler can also be successfully integrated into existing projects due to its ability of importing the structure from existing databases and automatically creating the entity-relationship model. In this way, it is easy to create up-to-date documentation that takes into account any changes that may have already occurred after implementation.