Database is the most crucial component of IT systems. In order to achieve high availability of the applications using it, replication mechanisms have been developed.

Replication in EuroDB provides the capability to distribute physical copies of databases between different instances, data centres, and even continents. In addition, replication on the logical layer allows to use different data sources to create complex database structures.

EuroDB supports the majority of popular replication methods. Two of these methods are recommended by EuroDB for their capabilities and usefulness.

There is a Master server in the primary data centre, which is the main database server. Synchronous replication takes place between this server and the DR server. If there is no response from the Master server for more than 30 seconds, the DR server automatically switches to Master mode. Applications using the database use an intermediary server that is aware of the fact of switching. During the switching process, the HS servers (A and B) are automatically switched to use the DR instance as the new Master server.

Backup copy from HS servers is made during the backup window. With this implementation of EuroDB, copies are made independently in both data centres.

Performing a backup does not affect the performance of the Master server or the DR server in any way. 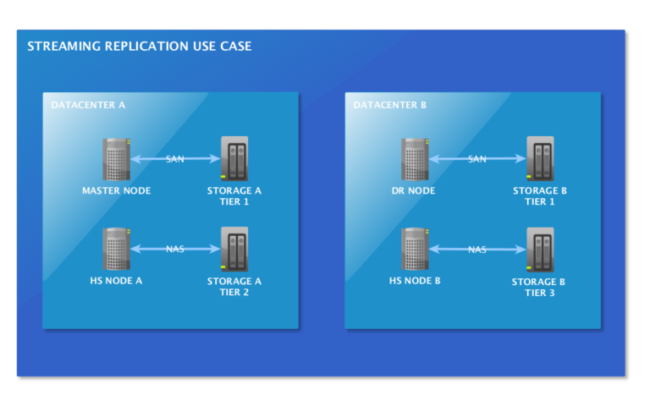 Example of the use of EuroDB logic replication

There is a master server in data centre A, from which all data is replicated to the DR server in data centre B. The replication engine has been configured to ignore the TRUNCATE type DML, ensuring data protection against accidental deletion. In addition, there is a read-only replica to which only the tables on which intensive readings take place are replicated. This optimizes disk space utilisation.

Thanks to the EuroDB mechanism for logical replication of INSERT type DML (without UPDATE, DELETE, TRUNCATE), a security instance is created in data centre C. It maintains a copy of all records that have been inserted into the TRANSACTIONS table, regardless of whether they have been changed or deleted in the production database. 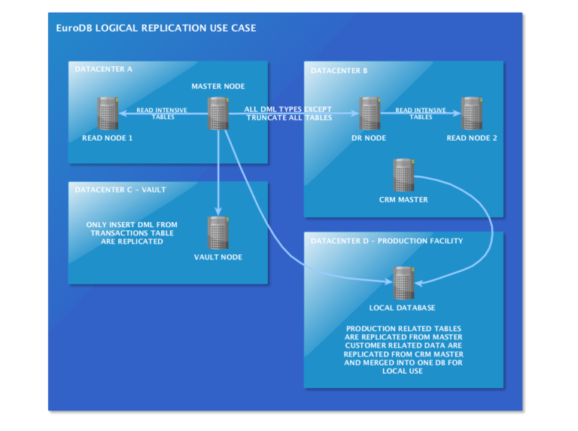