EuroTower is a platform for automation in IT infrastructure using Ansible®, equipped with a central graphics console. It is a complete, stable and fully supported Enterprise-class solution for professional use in enterprises and organizations.

EuroTower, thanks to a clear graphics console, making it possible to see the current status of connected hosts and the history of operations filtered by organization, teams and particular roles, such as developer, auditor or team leader. In addition, EuroTower makes it possible to create advanced workflows that can be performed both in a static and a dynamically generated environments.

Implementing IT Automation with Ansible® gives the impression of time travel. However, it is only with the right interface that we can ‘leave the engine room to enjoy the view of the stars’ – that's what we created EuroTower for. 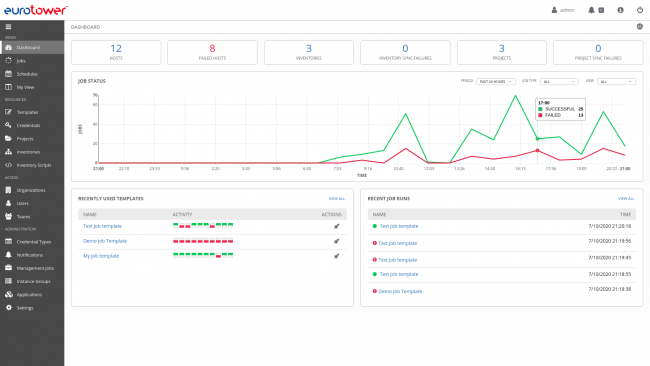 EuroTower provides transparent graphical user interface of NOC ( Network Operations Center) type to enhance the capabilities of the Ansible® automation engine. Thanks to it, the administrators can see what exactly is happening in a given environment. Very quickly, they can check the status of connected hosts or snapshots from recently completed tasks along with their result.

It is possible to customize how particular pieces of information and notifications are displayed in the console to suit individual needs, which further facilitates the management of the infrastructure and increases its readability. 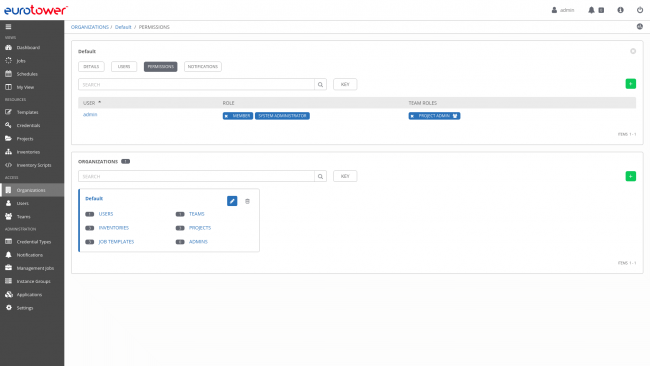 With RBAC (Role Based Access Control) system, it is possible to give each user or even entire teams the appropriate roles and permissions to access selected resources (playbooks, inventories, host information, etc.) and platform capabilities. 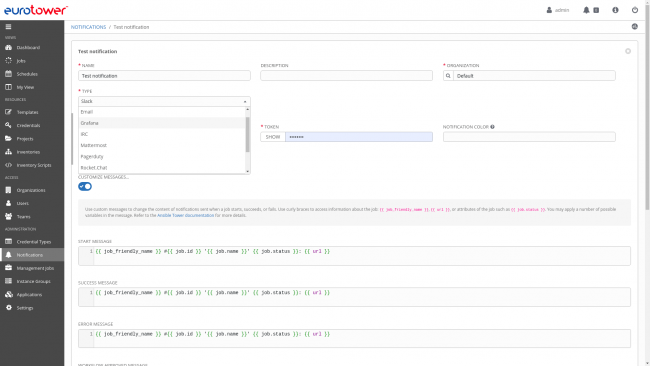 EuroTower provides integrated support for advanced notifications. They can be sent to individual recipients, teams, people in specific positions, or to the entire organization, through channels such as email, Slack, Webhook, Rocket.Chat, IRC, Grafana, Mattermost, PagerDuty , or Twilio. This makes it much easier to introduce a ChatOps collaboration model in your enterprise. 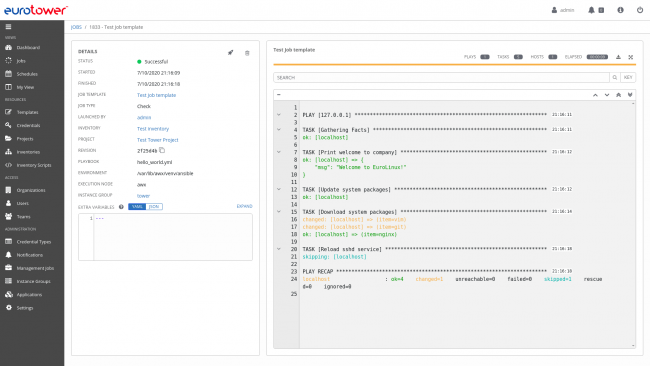 Playbooks in EuroTower run in real time. This allows the administrator to see what is happening to the hosts in Ansible® at any time. They can see which tasks on each machine are currently running, which have been successfully completed and which have failed, as well as where the error is due to. The administrator can also preview the task queue and schedule their execution.

Other types of tasks, such as source control updates or cloud inventory refreshes, appear in a common task view. Each task can run at any given time, or be scheduled to be run later, or can run continuously. 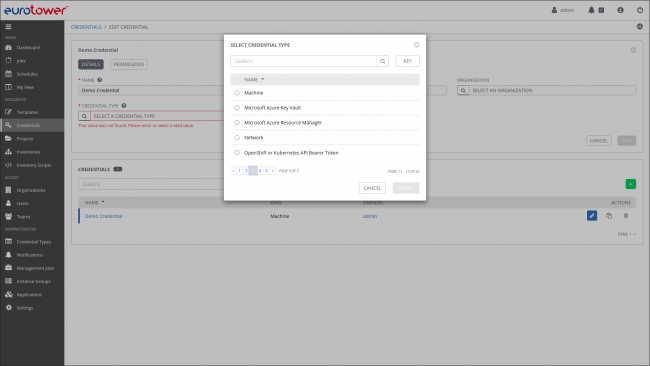 Easy connection to the cloud

EuroTower can automatically download resources from public cloud providers such as AWS™, Google Cloud Platform®, Microsoft Azure® , and OpenStack®. It also enables synchronization with a private cloud and a virtual environment. The list of environments with which EuroTower integrates is constantly being developed.

Credential Security
EuroTower uses the SSH protocol to connect to remote hosts. Before the key is passed to SSH, it is decrypted and then placed in a named pipe, so it will never be written to disk. EuroTower makes it possible to grant users and teams the ability to use Credentials without actually revealing passwords or keys. So if a user moves to a different team or leaves the organization, there is no need to change the credentials.

Centralized Logging and Auditing
EuroTower also provides a detailed history of task execution across all environments. For example, it is possible to see real-time information about jobs that are queued, scheduled, and currently being performed, along with details about templates, inventory, credentials, and settings. System and job tracking output can be exported from EuroTower directly to a selected endpoint such as Splunk, ElasticSearch, Sumo Logic® and many more.

Workflow Enhancements
EuroTower makes it possible to create advanced workflows that are performed both in a static environment and in a dynamically generated environment. Below are listed examples of these:

How is EuroTower different from the AWX project™?

AWX™ is a project developed by the Open Source community. Within AWX™ software development takes place. EuroTower, on the other hand, is a fully supported solution with an extended lifecycle for professional corporate applications. It is created on the basis of selected AWX™ versions, which are adapted by our engineers for use in critical customer environments, e.g. by extending its basic capabilities and ensuring stability and business continuity.

Integrations for EuroTower include a list of integrations available for Ansible®. Below are the most important ones.
See the Ansible® home page for a complete listing https://www.ansible.com/integrations